The runway is how planes will land and take off.

The runway is an airport's most integral aircraft infrastructure part as it is the structure that allows for aircraft to land and take off. Runways are placed down as single objects and can be constructed with up to 25 contractors and require 20000 construction energy.

Aircraft that land on the runway will proceed onto to the taxiway and into an available stall, following taxiway nodes. In order for aircraft to depart, a runway entrance is required, which can be placed by going into the aircraft infrastructure and clicking on the button showing a runway with arrows pointing in and out (you can find more on this below). When departing, aircraft will wait at this entrance until the runway is clear for them to enter.

The direction in which aircraft takeoff and land is determined by the direction of the wind, which is not currently visible to the player. Because of this, it may be advantageous to include multiple entrances, so that the aircraft will automatically take the shorter path, rather than taxiing across the entire runway to turn around and take off.

Runways can have three different foundations: Grass, asphalt and concrete. By default, small runways are constructed with a grass foundation but can later be upgraded to asphalt or concrete. While small-sized aircraft can land on a grass runway foundation, medium sized aircraft require an asphalt runway foundation. As of Alpha 33, runways cannot be extended. Instead, 3 differently sized runways are available: Small, Medium, and Large, which allow airplanes of corresponding size to land at them. Because smaller planes can use larger runways, medium and large runways are recommended to have multiple entrances to allow smaller planes to use less runway, saving time. 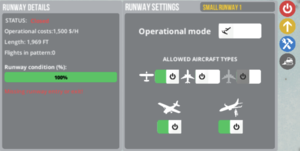 Clicking on a runway opens the runway panel. The runway panel consists of runway information. The left side of the panel shows the runway information. It shows it’s open/close status, operational costs per day, length, and flights in pattern. The right side of the panel shows toggles to change its operations mode (departures, arrivals, or both) and allowed aircraft types (small aircraft, medium aircraft, large aircraft (Added in alpha 33), general aviation and commercial flights). The top right of the panel has an input field for the runway’s name, open/close option, upgrades, repair, and demolish.

Runway entry and exits are attached to the the runway and are required at each end of the runway. They will allow aircraft to enter and exit the runway in a safe manner. They come in grass, asphalt, and concrete types, although only asphalt and concrete have angled variants. For medium and large runways, it is recommended to place these at entry points along the runway for smaller aircraft, so that they don't use up as much runway.

The following upgrades are currently available up to Alpha 32, but any upgrades involving runway extensions are going to be removed in Alpha 33:

When an aircraft utilizes the runway through either landing or taking off, the runway is exposed to wear and tear. This lowers the runways operational condition and causes it to deteriorate over time to the point at which it will have to be repaired. Repairing a runway is done by opening the runway panel and clicking on the "Repair" button. Additionally, a COO can be hired, and will repair runways automatically.